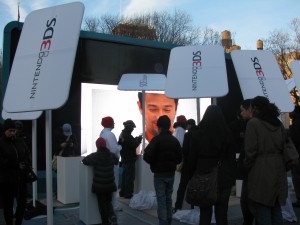 UNION SQUARE, NYC- With the smell of hot dogs and pretzels filling the brisk air, Nintendo debuted its first ever 3D gaming device, the 3DS, with entertainment, freebies and thrill at Union Square this past Friday.
The release of the new I-Pad and several other tablets released this year have forced many companies to play catch up, but Nintendo could care less. Simply out to further its dominance in handheld gaming, the iconic video game company pulled out all the stops.
“It’s like the super bowl; either you watch it on TV or attend it,” said Steven Kordia, who withstood his position as first on-line since 11 am the day before the launch and was eager to play the new Street Fighter title for the console.
However, the camp out wasn’t as packed as expected, about a hundred people showed up- more arrived after the sun had set and after the launch and festivities were already underway. During the time leading up to the launch however, volunteers navigated the site and passed out freebies from bags and hats to hot dogs and pretzels. Packets of hand warmers were the most requested.
In separate areas, the launch site took place on the corner of Best Buy on 14th street, while the test location was in the heart of Union Square, just across the street. With as many as six games to demo, gamers were able to see what the system was capable of. While the overwhelming effect of the 3D on the eyes was strong, it is adjustable and easy for any gamer to get used to and enjoy.
Nevertheless, fans are hungry for more.
“I’m looking for more games being available, like Zelda,” said gamer Makeda Bensie.
Posted by Claudia Kassab at 1:19 PM

Email ThisBlogThis!Share to TwitterShare to FacebookShare to Pinterest
Labels: http://reviewfix.com/2011/03/nintendo-goes-3d/