Reviewfix.com: You'd be a 'Sucker' To Avoid This 'Punch' by Claudia Kassab 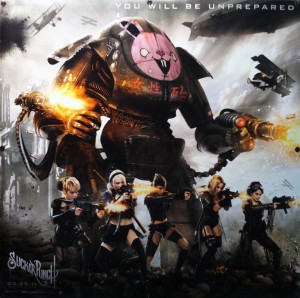 From guns to fire-breathing dragons and samurais to zombie soldiers, “Sucker Punch” is a new-age styled flick covered in action sequences, hot chicks and a story line that’s hard to care too much about. If only this it was reality. Then we’d care.
But between those action-packed scenes, sexy leather outfits and dark and demented settings that remind us of those video games we all love, the film ends up satisfying. Director Zack Snyder, best known for movies such as “300″ and “The Watchmen,” has that special touch when it comes to extraordinary stunts.
Because of that, the film is a success, albeit a brainless one.
It all revolves around an estranged young girl with a bizarre past, Baby Doll (Emily Browning), who ends up in a mental institution, where she then begins her bizarre twist on reality, “Sucker Punch.” Baby Doll leads her crew of bad ass girls, Sweet Pea (Abbie Cornish), the outspoken Rocket (Jena Malone), the street-smart Blondie (Vanessa Hudgens) and the fiercely loyal Amber (Jamie Chung) in a mission to free themselves from the evil mental hell and the hands of Blue (Oscar Isaac) and Madam Gorski (Carla Gugino). She finds it more comforting to imagine that she is trapped in a brothel, where Gorski is the dance teacher and Blue is the pimp where the girls are forced to dance for their clients, under penalty of death.
However, in reality, she is placed in a mental institution after her mother dies and her sister is raped by her outraging drunken step-father. A psychologically disturbing state of being, Baby Doll begins her journey in an unreal world, fighting the powers that be in an attempt to escape her fate.
In spite of this plot and conflict, Snyder is not concerned about whether we care about the storyline or the development of the characters, because he knows better than anyone that we don’t. All we want to know is if the girls escape or not and how and what new obstacles will stand in their way and how they’ll fight their way through it.
What helps this process is that on this adventure, the special effects were stunning and because of this, each battle an inspired romp. As a result, the film has a solid pace to it.
An enjoyable film overall, “Sucker Punch” will make you feel like you’re playing a game that forces you to run for my own life. Imagining it as a video game, where the armed, bad-ass chicks have to gain points to better aid their dangerous escape through the maze of dungeons of the mental insanity, is nothing but fun-filled hysteria.
Posted by Claudia Kassab at 1:21 PM

Email ThisBlogThis!Share to TwitterShare to FacebookShare to Pinterest
Labels: http://reviewfix.com/2011/05/youd-be-a-sucker-to-avoid-this-punch/